This is a guest post from Suzanne Dixon, MPH, MS, RD, dietitian and author of NoNutritionFear.com. Suzanne is someone who has been one of my “go-to research/evidence interpretation people” for much of my career. She has a master’s degree in epidemiology and stays on top of the data regarding nutrition and cancer.

I have had people ask me this question, so when I saw Suzanne’s explanation, I thought it was great! I figured my readers would like to know the truth. 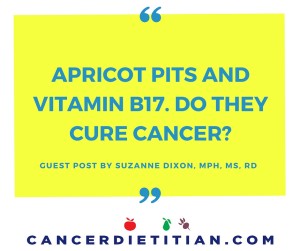 What’s the deal with people who claim apricot seeds are a cancer cure?

Laetrile, which is something derived from amygdalin, is found in high quantity in apricot pits. It’s funny, because it’s been around for decades in the alternative medicine community, and it just pops up every now and then when a patient stumbles on it (or has an alt med practitioner recommend it).

Some people call laetrile vitamin B17, although it isn’t actually a vitamin. (JULIE’S COMMENT: Someone is going to have to explain to me why it’s called this because I have no idea!!).

Our digestive bacteria, and the enzymes in the food we eat, break down the laetrile and release cyanide.

The website Cancer Research UK, which I do consider credible, has a nice, readable (written at a mostly lay level) short education piece on this. Basically, despite the fact that laetrile has been around for decades, it has never been shown, in controlled trials, to help manage or treat cancer.

I put this in the category of ‘useless, with higher than acceptable risk of harm’

There are some products for which we don’t have a lot of research, but for which we have some promising hints it may help (and a plausible biological mechanism for why it may have utility in cancer treatment). However, apricot pits or “vitamin b17” pills, shots or infusions, are NOT one of those.

Of the research cited to be done on this topic, it is all in cell and animal models. If this were so promising, why has it never progressed to even a basic, phase 1, pilot trial of just a few people? It’s been around since the 70s.

And there are recent case reports of cyanide poisoning from taking laetrile, the most recent of a 4 year old child, who suffered from severe metabolic/lactic acidosis, and came into the ER encephalopathic and unresponsive. The cause was intravenous and oral “vitamin B 17” (amygdalin) and oral apricot kernel administration by the parents, and the case report concluded, “Cyanide poisoning can be the cause of severe encephalopathy in children receiving CAM treatment with substances containing cyanogenic glycosides.”

There are very few complementary approaches for which I’d say don’t even go there, but laetrile is one of them.

Cancer patients should not use this product in the current form until more is known about its safety and effectiveness.

Can you really swallow pits whole??

The other thing to know is that if a person were going to swallow pits and seeds whole, I doubt the body would absorb anything useful from them. Even if laetrile were useful (and it’s not, as noted above), you probably wouldn’t get much from whole pits and seeds. Although, a person might end up with a flare up of diverticulitis!

I think this isn’t a good idea during treatment. The gut is already irritated, and large, indigestible seeds and pits aren’t going to help that situation.

Stick to the edible part of the plant!!

The Truth About Free-Range, Cage-Free and Other Regulations
5-2 Diet: What's the Scoop? 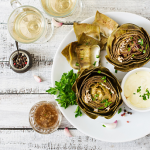 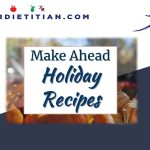