Last Thursday was the third cooking class in the series sponsored by Wake Forest University’s Translational Science Institute. I chose recipes for the classes that would work for the families that are getting weekly CSA boxes from Harmony Ridge Farms. It’s what I like to call “farmer fresh veggies!”

5 Simple Steps to Make Soup With Whatever Veggies You Have!

Basically, I teach the participants how to cook something with what’s in their box (seasonal veggies). This week we did a ‘make your own packet meal’ and ‘veggie inspired quinoa’. My suggestion is to assemble the packets first and place in oven. Then make the quinoa dish and they will all be done about the same time! 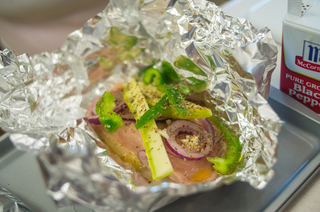 Make a Meal in a Packet

Recipe and suggested combinations from the
NC Cooperative Extension

This meal is fun and can be as customized as you like! You could even have each family member assemble their own toppings into the packet. All you need to do is choose at least one thing from each category. You can have as many in each category as sounds good to you, but make sure to have at least one!

Once you know what you’re going to put in your packet, simply follow the directions and you’ll have a great meal that cleans up quickly!

This recipe works great with kids too. Let them pile up their own packet!

Cooking Class Recipes Part 2: Veggie Inspired Quinoa
Spirulina: What is it and is there proof that it benefits my health?